albertz benda is thrilled to announce that Christopher le Brun has been awarded a Knighthood in the Queen’s New Year’s Honors. Please join us in congratulating Sir Christopher Le Brun on this prestigious distinction commemorating his excellence as an artist alongside his lifelong service to the arts.  Le Brun was born in Portsmouth and trained at the Slade and Chelsea Schools of Art in London, studying under artists including John Hoyland and Malcom Hughes. His work is characterized by an adherence to the essential values of touch, light, space and color while maintaining a questioning and strongly individual stance in relation to contemporary art history. Approaching the present through the long tradition of English Romanticism, Le Brun emphasizes the validity of painting as an entirely independent art form nourished by a natural kinship with history, poetry and mythology. For almost three decades, Le Brun has continuously served as a trustee of major British art institutions including the Tate, The National Gallery, The Dulwich Picture Gallery, the Royal Drawing School and the National Portrait Gallery. He was elected to the Royal Academy in 1996 and continued on to become its first-ever Professor of Drawing.Le Brun was subsequently elected President from 2011-2019, the youngest person to occupy the position since Lord Leighton’s appointment in 1878. During his tenure, the institution experienced a period of significant growth. It completed a significant expansion, which connected the campus and added new galleries and a theater; admitted artist collaborations such as Gilbert & George into the academy for the first time; and received some of the largest donations in its history.

Christopher Le Brun appeared in key international group shows, such as the influential Zeitgeist exhibition at the Martin-Gropius Bau, Berlin (1982). He challenged the dominant and prescriptive influence of academic modernism and became recognized as one of the leading young British painters.

Le Brun’s artistic practice, which has evolved to encompass painting, sculpture and printmaking, translates a wide range of cultural sources from philosophy to music into emotive abstraction. His early work drew upon mythological, dreamlike imagery, such as that of the nineteenth-century symbolist painters Arnold Böcklin and Gustave Moreau.Beginning in the mid-2000s, Le Brun began to transition toward complete abstraction. These recent paintings maintain the gestural brushwork and tension between covering and revealing characteristic of his earlier figurative work, with a renewed interest in the spatial coordinates of the canvas surface.In an interview with Studio International in 2014, Le Brun explains, “I let the work speak for itself. I don’t push the image because I want to leave you with a sense of immanence. From the drama of the image in my earlier work, I’ve switched to this other drama where the image is erased or obscured.”

With an emphasis on texture and surface, Sir Christopher Le Brun creates a combination of marks, strokes and veils that obscure and reveal colors and forms. The 2020 exhibition “Figure and Play,” the artist’s third show at albertz benda, unveiled Le Brun’s exploration of doubles and diptychs.

Christopher Le Brun addresses his process, explaining “It is more to do with allowing the image to emerge slowly. It is not to do with pushing the paint in a certain direction in response to nature, it’s more like responding to the appearance of the painting and how it prompts my imagination. I allow the paint to accumulate and it starts to center around a type of light and tonality, and that gives it its complexion.” Works by Christopher le Brun can be found in a number of prestigious museum collections including the Museum of Modern Art and the Metropolitan Museum of Arts, New York; Tate, the V&A and the British Museum, London; and the Yale Center for British Art, New Haven, US. 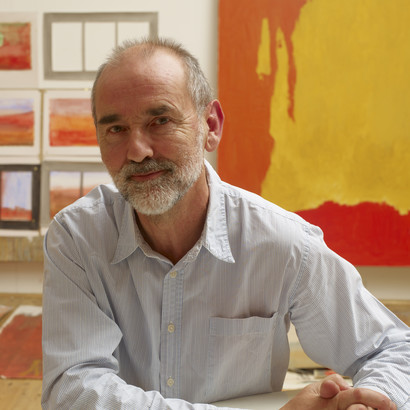