In the post-war Los Angeles of the early 1950s, where the movie industry dominated the cultural landscape like a colossus, sucking up all the oxygen, a stirring began in the visual arts that was to define a uniquely original, and uniquely American contribution to the painting and sculpture of the past 65 years. If there was a moment that marked the beginning, it might have been the exhibition of the Parisian Avant-Garde which was presented at the Los Angeles County Museum of Art eight years before LACMA even became a singular entity, when it was still part of the Los Angeles Museum of History, Science and Art. The collision of forces—when the echoes of influences from Europe (Cubism), New York and San Francisco (Abstract Expressionism) collided with the sun drenched, laid back, fetishistic Southern California car and surfer culture, and bohemian drug scene—produced an explosion of creativity that became known as the LA Cool School.

The catalyst, perhaps, was the collaboration of Walter Hopps and Ed Kienholz. Hopps—the cerebral bio chemist, curator-in-chief, and mysterious brainiac from LA—and Kienholz—the ultimate assemblage artist/scavenger and literal expressionist from Washington state—established an offbeat gallery in 1957 in an alleyway off La Cienega Boulevard in downtown LA that was called Ferus. Ferus attracted a like-minded cohort of radical individualists who were bent on challenging the prevailing cultural attitudes, both locally and those from afar. With hubris and bravado, the Ferus artists together created a collective vision of what they thought art could and should become. The Ferus Gallery gave the artists the platform for the presentation of an art that drew its inspiration from multiple sources, both art historical and from the environment they inhabited. Influences converged, passion and intellect were engaged, and seminal moments occurred to help shape the process: in 1962 when Irving Blum (who had taken over Kienholtz’s position at the gallery) gave Andy Warhol his first solo gallery exhibition ever at Ferus (the Campbell’s Soup Can Paintings); in 1963, when Hopps moved to the Pasadena Art Museum and presented the first retrospective of Marcel Duchamp in the US; in 1966 with Ed Kienholtz’s epochal retrospective at the LA County Museum; and in the decade from the late fifties to the late sixties when Ed Moses, Billy Al Bengston, and Ed Ruscha among a handful of others were on center stage. New York Abstract Expressionism and Pop were joined with LA Cool, and new legends and new images were created.

The personalities and styles that emerged from this creative cauldron could not have more eclectic. Southern California artists with roots in the 1950s and 60s—Ed Kienholtz, Wallace Berman, John Altoon, Craig Kaufman, Larry Bell, Frank Gehry, Robert Irwin, and Ken Price—have all come to occupy a special place in the constellation of American contemporary art and architecture. But it was three painters in this scene—Ed Moses, Billy Al Bengston, and Ed Ruscha—who defined the parameters of what painting could be in this uniquely American place. California Dreaming at the New Britain Museum of American Art will present more than 100 important works from 1952 to the present by these three artists, spanning more than 65 years. Taken together, the 100 works present a galaxy of creative possibility in painting: from the gestural abstraction and relentless experimentation of Ed Moses to the smooth, process-cool, pop objectification of Billy Al Bengston, and the cerebral and excruciatingly precise word-play and craftsmanship of Ed Ruscha. The work of Moses, Bengston, and Ruscha defines an epoch in American painting, and its presentation at the New Britain Museum of American Art will shine a long overdue spotlight on their collective achievement. 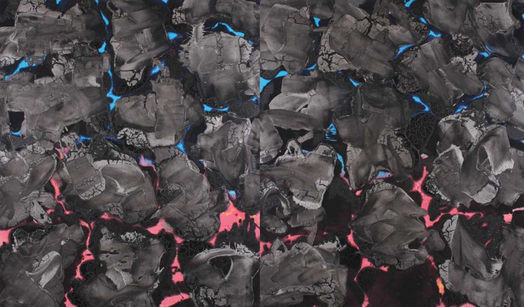