The Rosenwald-Wolf Gallery of the University of the Arts is pleased to present a major exhibition of Narrative Art from the 1970s by Bill Beckley. Beckley is known for his large-scale photographs coupled with narratives that bridged conceptual art with the Pictures Generation.

Born in 1946 in Hamburg, Pennsylvania, Beckley attended Kutztown University from 1964 to 1968 and in 1970 received an MFA from Tyler School of Art. There he studied with Italo Scanga, who introduced him to Bruce Nauman, Dan Flavin, Sol LeWitt, and Marcia Tucker, then a curator at the Whitney Museum. Through Tucker, his work was included in Art in the Mind (1969) at Oberlin, the first US conceptual art exhibition. Moving to New York in 1970, Beckley was one of the artists (along with Gordon Matta Clark, Rafael Ferrer, Barry Le Va, Jeffery Lew, Bill Bollinger, and Alan Saret) who organized the first exhibition at the legendary 112 Greene Street Workshop in October 1970.

Casting off restrictive formalist aesthetics, Beckley broke down media boundaries, emerging in the 1970’s as a major exponent of Narrative Art, a term that he invented. His color photographs referencing advertising images influenced artists of the Picture Generation like Richard Prince and Jeff Koons, who encountered Beckley’s work during his 1978 Projects Room solo exhibit at the Museum of Modern Art. Exhibiting typed fictions and glossy photographic surfaces, Beckley exhibited at Rudolf Zwirner, Cologne; Yvon Lambert and Daniel Templon, Paris and Hans Mayer, Dusseldorf. During this period, Beckley’s work was also included in the Venice Biennale, Documenta 6 and the Whitney Biennial.

Beckley’s works have also been exhibited at the Solomon R. Guggenheim Museum, the International Center for Photography, and the Paris Biennale. More recent exhibitions include shows at Chelsea Space in conjunction with the Tate gallery; a retrospective entitled Etcetera at Tony Shafrazi Gallery; and a solo at Sammlung Hoffmann, Berlin. In 2016, his large-scale work was in UNLIMITED at Art Basel and he is currently featured in Narrative Art at the Musée d’art moderne et contemporain de Saint-Etienne, France. Beckley’s work is in the collections of The Museum of Modern Art; Whitney Museum of American Art; Solomon R. Guggenheim Museum, New York; Smithsonian American Art Museum, Washington; Museum of Fine Arts, Boston; Tate Modern, London; Daimler Collection, Stuttgart; Sammlung Hoffman, Berlin; and private collections including the Morton Neumann Family, Jeff Koons, and Sol LeWitt. 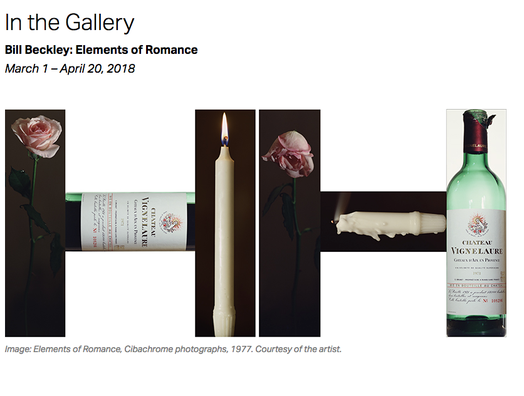